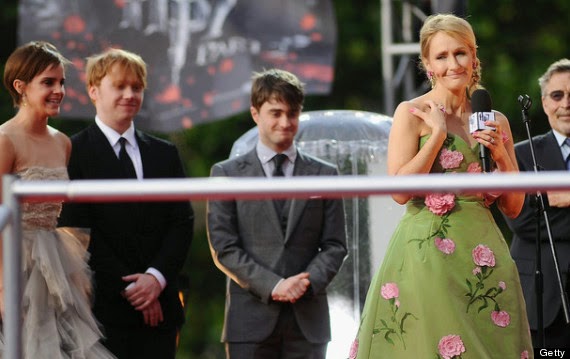 Harry Potter is a seven book children's series that has sold over 450 million copies, making it the most successful book series in all of history. In addition to being translated into over 67 languages, the books spawned eight movies, which also became the highest-grossing film series of all time. The intricate stories, which chronicle the trials and tribulations of a young wizard and his friends, have also inspired a successful brand, estimated to be worth $15 billion.
Behind all of the fame and fortune that Harry Potter has garnered, is one inspiring success story: that of J.K. Rowling. Joanne Rowling was riding on a train from Manchester to London, England in 1990 when the idea for Harry Potter struck her. After getting off the train, she started to write right away. But later that year, her mother passed away after fighting a lengthy battle with multiple sclerosis. The death took its toll on her and evidence of her pain can be seen in the first book, where Harry copes with the deaths of his own parents.
Rowling's struggles were not over. She moved to Portugal after accepting a job to teach English as a second language. While there, she met and married a Portuguese television journalist, who she married and had a child with. The marriage was short-lived; Rowling gave birth to daughter Jessica in July of 1993 and the couple parted ways in November. It was then that she decided to move back to Edinburgh to be near her sister. She recalls that as a low point in her life - she was then diagnosed with clinical depression. But still, she persisted.
Ultimately, she ended up taking a postgraduate teaching course in order to give her the credentials to teach in Scotland. That was in 1995, when she had just finished the first book of the Harry Potter series. It took her a year to find a publishing company that would publish the book, still she was told to get a job - children's books didn't make any money. But, in only a matter of years, Rowling would be richer than the Queen of England herself.
The popularity of the books began to snowball. Rowling received awards for her work and gained notoriety in the United States and in her native United Kingdom. By the time the fourth book was released, it sold an impressive 373,000 copies on its first day of sales in the U.K. and a subsequent three million copies in the U.S. Rowling finished the seventh and last book of the series in early 2007. It was released some months later and sold 11 million copies on its first day in both the U.S. and the U.K.
When asked what she attributes her success to, Rowling admits that it was her lowest moments that allowed her to persist. The feeling of having "nothing to lose" was what liberated her and propelled her onward to give us one of the most inspiring success stories of all time.

Success Stories of Some Great Entrepreneurs

Everyone loves good success stories. There's something about success and successful men (and women), that makes them so charismatic and appealing to others. They are a source of constant inspiration to people around them, and they stand for the strength of the human spirit, and its triumph over difficulties.
Let's look at some equally inspiring success stories that are sure to leave as feeling stirred and inspired.
Bill Gates
There is absolutely no one in this world who hasn't heard of Bill Gates and the Microsoft Corporation. Who among us has not been touched by his gift to the society in the form of the software we use on our computers? He is indeed one of the greatest business leaders the world has ever known.
An acclaimed geek during his student life, probably made fun of for his intense interest in Math and Science, Bill Gates, with his hard work and dedication, transformed himself from an object of ridicule to a symbol of power and wealth.
A man of action, Bill Gates is known to be a risk taker, and today, holds the unrivaled position of the richest person in the world. He is also the co-founder of the charitable organization - the Bill & Melinda Gates Foundation, which carried out humanitarian work in the field of illiteracy, and poverty.
Steve Jobs
Steve Jobs is the founder of the Apple Computer, who went on to found the NeXT Computer after he left Apple in 1985. However, as fate would have it, he came back to the company he founded in 1996, giving it a new direction with the launch of products like iPod MP3 player, the iTunes Music Store, and iTunes digital music software.
In addition to this, he is also the Former Chairman and CEO of Pixar Animation Studios, which was recently brought by Walt Disney Studios. Today, Jobs is the biggest individual shareholder at Walt Disney Studios.
Donald Trump
Donald Trump is a business leader in the area of real estate. There's hardly anyone who's impervious to the mention of his name. In spit of personal debts to the tune of $900 million and business debts amounting to $3.5 billion in the mid 1990s, Donald Trump bounced back and established himself once again as a name to be reckoned with. His reality TV show "The Apprentice" became an instant hit and his dialogue "You're fired" became a rage.

Learn from the masters and their MLM success stories and be inspired. Your MLM success stories start every morning after coffee or tea and you begin to brainstorm. Are you ready for the new day? Take a moment to bask in your creative genius and figure out how to make the most of the day. Enjoy the soft clatter of the keyboard and a nice blueberry muffin.
Log onto Skype or other messaging services and connect with your network. Don't forget to check your emails for important information from either your upline or downlines. Are you ready to be inspired by MLM success stories?
Your MLM success stories are based on your network's ability to perform their function and on time. Proper training and support are required for your network to be efficient and on time. Most of the stories are very inspirational and can be found in industries that are various.
Take a moment to examine your emails in depth and respond a bit to them. Check your voicemail messages and jot down any major concerns that you have captured. Your management skills are vital in handling a large network of people that have joined your company. You may need a dedicated administration team to help you handle all the incoming reports or emails.
This administration team will need to be professional and on the ball with their responses and paperwork, especially if you keep physical inventory and have to ship it from a secure location to your distributors that are out of state.
Some MLM success stories involve personal courage and inspiration that will melt your heart. Take each of the stories and learn from them. Each one has a different lesson to teach you and each story can help you overcome the deepest shadows of despair. So be prepared to write notes and use them as tools for your business.
Your inspiration must be found deep inside, find a goal and achieve it. Your teammates are counting on you to lead them through the mires. You need to be courageous and enduring like a bridge, adapt to the environment and make it yours.
You are the winner and can change the lives of many, not only yours but those who surround you like a light at night. Your MLM success stories know no bounds and should be written down and saved for references. Leaders inspire the stories but it is us that create the success from ground zero.
Take a little time every morning to read a story or two. Remember that proper training and support is needed for every member in your company. You may need help in administrating your members and you can outsource to virtual assistants or have in house help. Inspire yourself with the right thinking and effort in creating solutions to the problems around you.
Don't hold success from you but embrace the little steps that can help create a bigger level of success. You can be successful with the right frame of mind and creative energy flow.